PicoCandy is revolutionising the way people communicate with its “Stickers as a Service” platform. This new platform allows content owners as well as social networks and messaging apps to engage their users on a deeper level. It’s also the first multi-platform to help mobile application developers monetize their apps with a wide range of licensed and designer stickers through ready-made sticker stores or enriching existing sticker stores with more content.

PicoCandy’s “Stickers as a Service” is a mobile SDK (software development kit) that any developer can use to build a full sticker store right into their app, using only a couple lines of code. It provides a comprehensive content management system and server architecture that developers can use without worrying about scalability and infrastructure. PicoCandy’s SDK currently supports Android and iOS, and will include other major device platforms very soon.

“Not every company has the resources to have a lot of people working on things like stickers. Most companies have to concentrate on core application functionalities. So we want to take this one pain point away by continuously providing them with content and a way for them to manage it,” explained Geraldine Yong, Founder and CEO of PicoCandy.

PicoCandy’s stickers feature thousands of iconic and original characters from various brands and designers, giving users a wide range of choices to express themselves with. In fact it has partnered with many U.S. brands such as Care Bears, Strawberry Shortcake, and Suzy’s Zoo, in addition to inking exclusive deals with popular characters from Japan, Taiwan, and Hong Kong. PicoCandy is also working on providing localised content for every country it’s distributing to, so that the stickers can reflect cultural differences and themes without losing anything in translation. First inspired by Geraldine’s desire to better express herself in messages with her favourite characters, PicoCandy was conceptualised in the United States and is now expanding in the Asian market. “This is the fun part about being in the business of digital stickers. It’s really interesting to work with characters that you currently like, and better yet the ones that I grew up with,” Geraldine said.

To help PicoCandy realise its vision, Geraldine and her team successfully raised a seed round of over one million US dollars from venture capitalists including Ardent Capital, Wavemaker Labs and Siemer Ventures. Prominent angel investors from Southeast Asia and the United States like David Helgason, Founder and CEO of Unity Technologies, are also strategic backers. On top of that, PicoCandy has started to integrate with several beta partners that include messaging apps and SNS (social networking services) in the United States and Southeast Asia.

To get more information about PicoCandy, visit this website 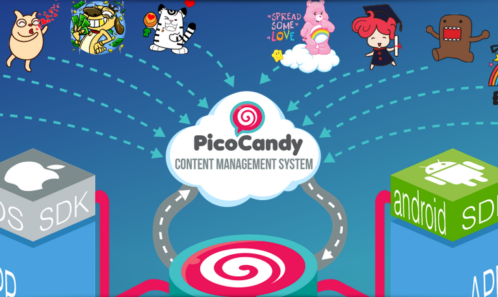