The collaboration is powered by Viddsee’s Channel feature, showcasing a curation of films from the archives of the Thai Short Film & Video Festival, the longest-running film festival in Thailand organised and founded by the Foundation.

“The Thai Film Foundation has our greatest respect in its tireless work promoting film culture in Thailand almost  20 years. We are honored to host and promote Thai short films on our channel as Thailand is the most vibrant and dynamic of industries in Asia,” says Derek Tan, co-founder of Viddsee.

“Viddsee has created a trusted platform in the filmmaking community over the past year, and we are excited to showcase Thai content along other quality short films from the region. We hope these films will travel to new online audience across the region on their platform,” says Chalida Uabumrungjit, Director of the Thai Short Film & Video Festival.

Highlights from the channel are “Colourblind” by Banjong Pisanthanakun (‘Pee Mak’, ‘The Shutter’, ‘Alone’), “Shan at the Dawn” by Nattachai Jaitita (selected to screen at the Clermont-Ferrand International Short Film Festival), and ‘I’m Fine’ by Tanwarin Sukkhapisit (‘It Gets Better’, ‘Insects in the Backyard’, ‘Still’). The Thai Film Foundation Viddsee Channel is hosted at www.viddsee.com/channel/thaifilm

The Thai Film Foundation, a non-profit organization, was established by film activists to promote the film culture in Thailand. The Foundation also works closely with the Film Archive of Thailand to promote the significance of film as an art form. For more information: www.thaifilm.com

The Thai Short Film and Video Festival started in 1997 aiming to encourage to independent spirit to expose their hidden creativity. It is a local short film and video competition in conjunction with screening selected short films from several contras. Within 17years, the number of entries increases from 30 to 500. Creating the dynamic atmosphere for the microscopic Thai film culture.

Viddsee is an online video platform for filmmakers and audience of Asian short films. Built and designed by engineers and filmmakers, Viddsee enables users to easily discover, watch and share stories from Asia on their desktop and mobile devices. Our vision is to continually grow the community of short film audiences to enable a wide and accessible market reach for short films and become the leading micro-cinema platform for Asia. Visit http://www.viddsee.com 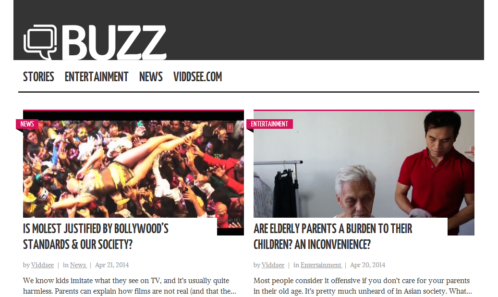